Who Are the Alpha Narcissists?

Narcissists make the world go around in an unhealthy way with their manipulations that harm others. So who are these people? One major attribute is they want to control you and get their needs met not communicate with you. Their major attitude is “I’ll get mine and screw you.”

We all know them. We have been hurt by them. And if we are honest, some of us have a bit of the narcissistic edge to our own personality. Or a lot. They are the takers of the world, leaving pain and destruction in their wake. People with narcissistic personalities justify and rationalize their hurtful and unlawful behaviors. As a result, they cannot achieve intimacy with others. They avoid true caring for someone else as that would cause them to be dependent. Avoiding dependency is a defense mechanism in order to stay safe.

Narcissistic behavior can be a trait or it can take over the personality-it depends upon the degree of the self-involved behavior. We all have a little bit of selfishness in us. Selfishness is relative-it’s a matter of amount and strength that makes it appropriate or harmful. Some looking out for ourselves is okay as it helps us set boundaries with others and keeps the takers from riding roughshod over us.Traits and behaviors can be identified and challenged.

When there many narcissistic traits that hurt others on a consistent basis, there may be a personality disorder. Narcissistic Personality Disorder is a psychological condition where a person’s outlook is so distorted that they cannot see the needs of other people and only look out for themselves. They have a severe empathy imbalance-too much empathy for themselves and none for others. They don’t have a conscience and use others for personal gain.

(1) Some Alpha Narcissists are business people who control the fates of their workers and whose mantra is “I get to do what I want to get what I want because I can.” They are an entire group of greedy people that are a detriment to our society as a whole. Through their greed, they have helped to create a welfare class of people who cannot get jobs.

They are the successful CEOs who take pride at laying off workers ruthlessly cutting costs for a company to increase profits and their own bank accounts while leaving families without jobs.

The Wall Streeters, Bankers and Savings and Loan officials and the Corporate Raiders who cheat others out of their money are destructive narcissists.

They are the owners of sweat shops who pay workers very little money so they can have more profit.

They are the illegal traders and off-shore businessmen who profit from getting around laws.

They are the able-bodied ones who are the “shirkers” of society, using others and the government for money so they do not have to work.

They are politicians and public workers who are on the take. A bribe is being willing to take money for illegal activities compromises one’s integrity.

The telemarketers and scam salespeople who over-sell inferior products for their own financial gain. They are the paparazzi and others who prey on famous people.

(2) Parental Narcissists who border malignancy harm those around them.

There are narcissistic families who have values and mindsets of cheating others and breeding aggression. They teach their children to engage in criminal activities as a way of life. They sneer at those who are weak and believe that they have the right to steal, sell drugs, and set up scams.

As parents, they are the physical abusers and the verbal ragers creating unhappy family members who will bear their scars for a lifetime. As young people, they bully weaker siblings and peers.

They are parents who were abusive or neglectful of the children and who after a divorce use the courts to force visitations with the children, thereby further victimizing them. During a visitation they turn the children over to their mother or girlfriend. They continue to criticize and blame their former partner. (See my article Children of Divorce)

People who are sexual with children always are narcissistic in nature. They  view helpless children as sexual objects that are available for their own sexual satisfaction.

Some narcissistic parents have a public face where they cleverly project a “See what a wonderful person I am” identity to those outside their home. Of course, their children and spouses know different and have to deal with public approval of what they know to be an act as they are on the private front line of tantrums, denial and controlling behaviors. Children who have grown up with selfish parents describe them as controlling, stubborn, neglectful, hateful, phony, critical, judgmental, dishonest, manipulative, martyrs and abusive.

They are parents who use children for their own emotional needs making the child a confidante of their problems. They discuss their problems continually putting the child in the parent’s role of care taking. This form of needy narcissism is called Emotional Incest. The child who has to listen to the parent’s problems becomes a “parentified child’ who loses his or her childhood. Read the classic book about how children give up their sense of self to meet the needs of the selfish mother: The Drama of the Gifted Child by Alice Miller. I cried all the way through this book.  I went back a year later to reread it. At that time I was ready do the deep processing about some of the wounds of my childhood and of the family members who passed this theme on.

(3) They are the addicts who turn to crime to support their own selfish habit. They are parents who use alcohol and drugs while ignoring their own children’s needs for security and safety.While they may not be narcissistic before coming under the grips of an addiction, the desperate need for the next “fix” fosters narcissistic manipulation of others.

They are the people in relationship who have multiple affairs-caring more for their right to engage in outside relationships with others so that they can feel good than for the needs of their partners and their children.

(4) Alpha narcissists believe they have the right to break laws. If their behavior becomes extreme and is left unchecked, they become gang members, mobsters, drug lords, con artists, manipulators, sociopaths and dictators.

(5) There are Alpha Narcissists whose extreme behavior crosses over into psychopathology. Think ramped up narcissism. Think no conscience. Think predatory. Think Dark Triad of Narcissism. This category includes terrorists and anarchists who destroy property and lives to provide publicity for their cause or create a revolution to gain power. Psychopaths are ramped up narcissists who actively harm others. Some are sadistic in their hurting others-getting pleasure from causing others pain. Their cruel and grasping behavior at the dire expense of others which includes the right to take money, material goods and even the lives of others causes much worldwide pain. It is helpful to understand the dynamics of narcissists and psychopaths in order to avoid them and not fall under their seductive spell.

My Writings on Narcissistic Traits

A few people have criticized my articles on narcissism saying that I didn’t really know toxic narcissism. It’s true I don’t write about the Dark Triad of narcissism; I leave that to others. I’ve had serious harm done to me early on in my life to understand how entitlement beliefs contribute to self-involved actions.  Certainly not as much trauma as others have had, but enough to affect my whole life. The effects of early childhood experiences continue today with chronic illness associated with early sexual abuse. I also have looked long and hard at my own selfish behavior. Of course I’d pick up some of it being partially raised with a dominant patriarch in my father’s family who hurt others. I also got a good dose of codependency growing up from the women in my family who protected and enabled others. Narcissism and codependency are the classic patterns in dysfunctional families. I know both sides of the taking and giving too much continuum. And made the decision to clean up both the giving too much of myself away and those selfish edges of my personality.

I’ve worked for thirty years to move into the middle range of not taking too much or give myself away. I’ve released many of the narcissistic traits embedded deep in my psyche through constant monitoring of my entitlement thoughts and behavior. I’ve addressed that tricky ego again and again. The ongoing goal for my life is being kind, loving and fair in relationships.It helps us to understand these personality traits that cause grief for others.

Narcissism and the Shadow Self

The Shadow Part of the self is Carl Jung’s concept of those darker aspects of the human personality that remain unknown hidden deep in the unconscious mind. They offer an opportunity for growth and liberation if we systematically address them. People who are selfish often use the defense mechanism of Projection. Carl Jung explained the defense mechanism of projection by saying, “Everything that irritates us about others can lead us to an understanding of ourselves.” Relationships, the vehicles through which we grow, can mean great instant karmic possibilities! That is if you pay attention, take responsibility and clean up selfish your act.

To learn more about how to challenge these grasping, ego parts of yourself, read my article The Dark Must Be Played Through and my book Your Quick Anger Makeover, as it addresses how to deal with anger successfully by going to the deepest roots of it and challenge selfish behavior. 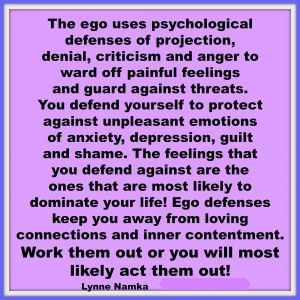 “Before you diagnose yourself with depression
or low self-esteem, first make sure that you are not,
in fact, just surrounding yourself with assholes.”
~ William Gibson