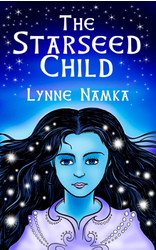 It’s not easy having a Sixth Sense, knowing things and being different from others. Why does Nan’s skin have a bluish cast? And what’s with this traveling through the Stargate to another dimension for Mystery School? Definitely different! Nan can read the color of people’s hearts and has a haunt for a roommate. There is a dark spot in her heart and her anger grows living under the iron fist of her mother who Nan secretly calls Gestapo Mum.

Nan’s two friends are sensitive but strong individuals with special powers of their own: Tanner, an African-American boy from a stable family and Jesus being raised by his grandmother after his druggie mother ran away. The children explore the desert by their small southwestern town, spy on a camp of homeless people. Exploring a cave which she must clear of Native American ghosts before she can proceed, Nan is horrified to find a drug smuggling compound and that her mother is involved in money laundering.

Caught in a battle with the dark forces and the conflict within herself, Nan is thrown into a coma after finding out that she indeed is her mother’s child. She must confront the small dark place in her heart that resonates with the dark lock in her mother’s heart and battle the Dark Lord who tries to force her to submit to his evil powers. Powerful forces are working to steal her power for their own sinister uses. As Darth Vadar said, “You have no idea how powerful the Dark is.”