The Big Game of Life

The Tug of War of Life 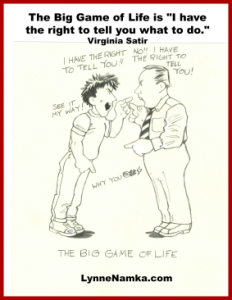 The Big Game of Life is a power struggle with others which serves to allow the player to avoid personal responsibility and refuse to look at his own behavior! Virginia Satir first described the Big Game. The Big Game is often one aspect of the Family Disease or I Have the Right to Tell You What To Do! The power struggle disease is prevalent in families with dysfunctional behavior.

This Family Disease is the struggle between domination and submission, between addictions and co-dependency. It keeps the people involved in dysfunctional behavior as they struggle for control. The game must be called off in order to win maturity and independence. The tug of war that is behind the Big Game has been “I know what is best for you.” The Big Game is the basic power struggle where each individual tries in a convoluted way to get their underlying needs for power met.

Catching yourself in the act of thinking and worrying about what someone else is doing is the first step to stopping the game. Looking at your need to focus your energy on the other person instead of yourself is the second step. A simple formula to remind yourself is ” ….. is going to do what …. is going to do.” Cats practice cat behavior; snakes practice snake behavior. Mary practices Mary behavior and Steve practices Steve behavior. You can only expect a person to practice behavior that is consistent with his attitudes, values, coping mechanisms and unrecovered addictions. Stewing and fretting over another person’s choices is a way of binding up energy for both of you.

Withdrawing from the Big Game of Life is one of the greatest freedoms that you can give yourself. When you give up your shoulds and expectations for others and focus on cleaning up your own act, a heavy weight is lifted from your shoulders. Creativity and productivity flow in as you release your co-dependent manipulation. You have more time and energy for more exciting challenges in your life than trying to fix someone else.

Steps for Moving Through the Big Game of Life

Becoming upset with others who play the Big Game (projecting what you don’t like about yourself on someone else and becoming angry.)

Learning about the Big Game and recognizing how one has played it. You learn to recognize the players in the game and the crass and subtle manipulations that people use to control each other.

Recognizing the bad feelings (guilt and discomfort over using blaming or manipulating, etc.) because you have played through the family script.

Bringing it to a conscious level by deciding to catch yourself when you are playing the game (learning to break the blame/manipulate habit!)

Accepting that the Family Disease of the Big Game was a part of your upbringing so of course you would catch it. Controlling others is learned behavior; children learn what they see so it stands to reason that you would develop a part of your personality that has a need to control others.

Understanding how playing the Big Game served you. Figure out how it played a function or a purpose for you. Did it get you what you wanted? Did it make you feel powerful? How did it help you? How has it hurt you? Has focusing on what is best for others kept you from looking at your own behavior?

Embracing that part of yourself that needed to play the Big Game. Understand that this is only a part of your total personality that needs to be understood and accepted. It is not bad; it is just learned behavior that can be unlearned to help you become a healthier person.

Observe yourself when you feel the urge to judge or try to control others. Watch your anger when others do things you do not approve of.

Forgiving yourself for playing the control game. The need to control others is just learned behavior and you can change it. You were not a bad person for learning what was modeled in your family of origin. You can recognize that there was really nothing to forgive — learning about one’s needs to control others and succumb to the manipulation from others is all part of life’s lessons that you came to learn.