The Many Causes of Feelings of Insecurity and Abandonment

Abandonment issues are created through early neglect or abuse by the parent(s) who are unable to love or treat the child well due to their own psychological or addictive unresolved issues. Some parents are not emotionally available to fulfill the child’s needs and they are fulfilling their own needs by turning to their addictions, career, selfishness, anger or unresolved psychological issues. Other causes of neglect happen when the parents are unavailable when they work long hours or have a large family with not enough time and resources for all of the children. As more parents get caught up in alcohol and drugs or in their narcissistic needs, our societies will have more children growing up with issues of abandonment. 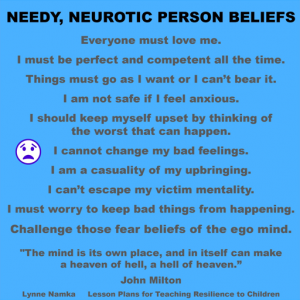 The neglected child feels an absence of being taken care of by others either physically or emotionally. The child can feel fear, shame and terror and absolutely powerless and hopelessness. Out of great insecurity and feelings of powerlessness, a needy child is born. If that child’s parents raged, the child learns to either suppress due to fear of being further rejected or punished or to express great anger.

Some abandonment issues can be related to physical security and fears of survival of the physical body. Rejected children can fear annihilation if their emotional and physical needs are not met. The external rejection and lack of love are internalized by the child along with beliefs of being unworthy, undeserving and unlovable. These children can grow up to become jealous and insecure in their relationships. There can be a fear of future abandonment affecting issues of intimacy, loss, loss of control during illness and death.

Not having homeostasis and balance in themselves, insecurely attached people anxiously seek it from others. They look outside of themselves for self soothing–this is called external locus of control. They can use significant others as emotional pacifiers. They turn to another person to calm themselves rather than learning and using self-soothing approaches thus putting themselves at the mercy of another person.

One woman said, “I don’t know what real love is. I latch on to others so I won’t feel completely alone. My parents threw me in my room when I was little. I felt I had done something really bad and I was bad.” As an adult, her husband became overwhelmed with her neediness and distanced when she demanded he calm her high emotions. Autonomy is learning to take care of your own high arousal states.

The neglected or abused child suffers psychological injury as his basic physical and/or emotional needs are not met. He or she is deprived of soothing support and the necessary stimulation to produce brain growth. Normal childhood development is disrupted, leaving the child empty and needy and fearful of being rejected and abandoned further by the parent. This anxiety is replicated in later life by fears of losing the partner. They become insecurely attached and excessively try to cling on to those who make them feel safe. Attachment disorders are viewed by trauma researchers as the core issue in vulnerabilities that can emerge as post traumatic stress disorder.

Other forms of feeling deserted include being the overly adored baby or child of a parent’s eye and then having to share attention with a new baby or a parent’s new job or passion. Or it could be a parent turning away from interest in you to getting a divorce or their having an affair. These scenarios are “Paradise won and Paradise lost” where a child went from full parental favor to a big fall with those accompanying feelings of confusion and helplessness. Feeling unwanted can set up loneliness and fears of facing solitude.

Trauma theorists agree that some of the personality problems we experience as insecure adults harkens back to the days when we were small and experienced overwhelming feelings we couldn’t process. Relational trauma and feeling overwhelmed occurred when we didn’t feel safe and there was no one there for us. Small issues and large ones-we have all been abandoned in some way or the other:

“If your heart is wounded, console and comfort it and don’t hesitate to reach out to others for help in doing so. I hold my heart in the gentle arms of love. I allow others to help me heal.”
Sue Patton Thoele, The Woman’s Book of Spirit